It sounds absurd, right?  But that’s what’s been happening with institutions that abuse people with disabilities.

First, an example of abuse from my local area:

NEW CITY – Frank Zanghi says his blind, deaf son, who uses a wheelchair, was abused when he lived in a facility for the developmentally disabled in New Jersey years ago. His son’s front tooth was knocked out, his back was slashed and his penis required five stitches.

Now what happened to the monstrous place that subjected a deaf/blind child to such horrible physical and sexual abuse? The perpetrators were jailed? At the very least, was the institution involved shuttered, and the millions of taxpayer dollars supporting it moved elsewhere to non-abusive settings? Nope and no.

The father of the victim wants more funding for the types of places that so severely abused his son.

Zanghi says the abuse happened because of funding cuts to the facility. Now he’s worried that Gov. David Paterson’s proposed budget that reduces funding for the Office of Mental Retardation and Developmental Disabilities will take a severe toll on organizations like Jawonio, where his son, Joseph, has been receiving care for 15 years.

Though Jawonio is not the same culprit in New Jersey that abused Joseph, NO institutions should be receiving financial rewards (increased funding) for the abuse and low quality of life they so often provide us. We should shut down institutions, and put that money into home care and small group homes integrated in our neighborhoods. We should make this transition all the faster when the recession is pressuring states to shed expensive and outdated programs like institutionalization (sadly, states have not been increasing home care to compensate as they close institutions).

Further, although funding cuts definitely hurt quality of life in institutions, increased funding often makes no difference in these hell holes. Last year, the state of Texas poured millions into its state institutions. The result? The night staff at Corpus Christi State School arranged human dogfights, threatening mentally disabled residents with jail unless they fought, and laughing at their terror and betting on the outcomes. ABC News recently brought national attention to this disgusting story (warning: contains disturbing violent videos). 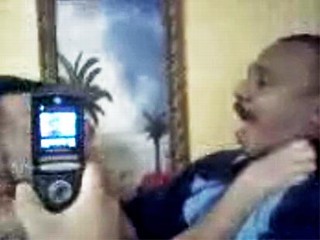 In this disturbing image of the "fight club" at Corpus Christi State School, one resident chokes another, as staff snap pictures with their cell phones.

After seeing this debacle, merely the latest chapter in its long and infamous history of abuse, the state will obviously close the doors on this dangerous environment and move the residents somewhere safer, right? NO!! Texas’ solution? Putting an additional $112 million into their 13 gulags for the mentally disabled! Whenever they abuse people, these institutions get rewarded with more money! Incredibly, this $112 million dollar commitment was enough for federal prosecutors to back down on the numerous civil rights violations they had found, and settle the case. Closing down these places isn’t even on the table; all the thinking is deeply embedded “inside the box.”

“They’ve already dumped lots of money into the system and nothing has really improved,” said Beth Mitchell, Senior Managing Attorney of Advocacy Inc., an organization that works to protect the rights of Texans with disabilities. “It’s sad that we may end up spending a significant amount of money and not see a significant improvement to the system.”

If we actually care about stopping abuse, we have to move to a new, community model.  Repainting and refurbishing a car with no wheels won’t get us anywhere.