Ebola hemorrhagic fever affects much of the mammalian family tree: its spread should make us remember our intimate connection with other mammals and the environment

All animals sustain themselves on an ecological tightrope of sorts, delicately balancing so many needs, including water, food, space and safety, all tied to the habitat they live in. You kick over habitats, species go into chaos trying to adapt. We, the humans, inextricably interdependent with the environment and other mammals, are ultimately affected. In severely impoverished African countries, the people greatly widen their menu to encompass more animals’ meat than is acceptable in Western cultures. This means “bushmeat.” 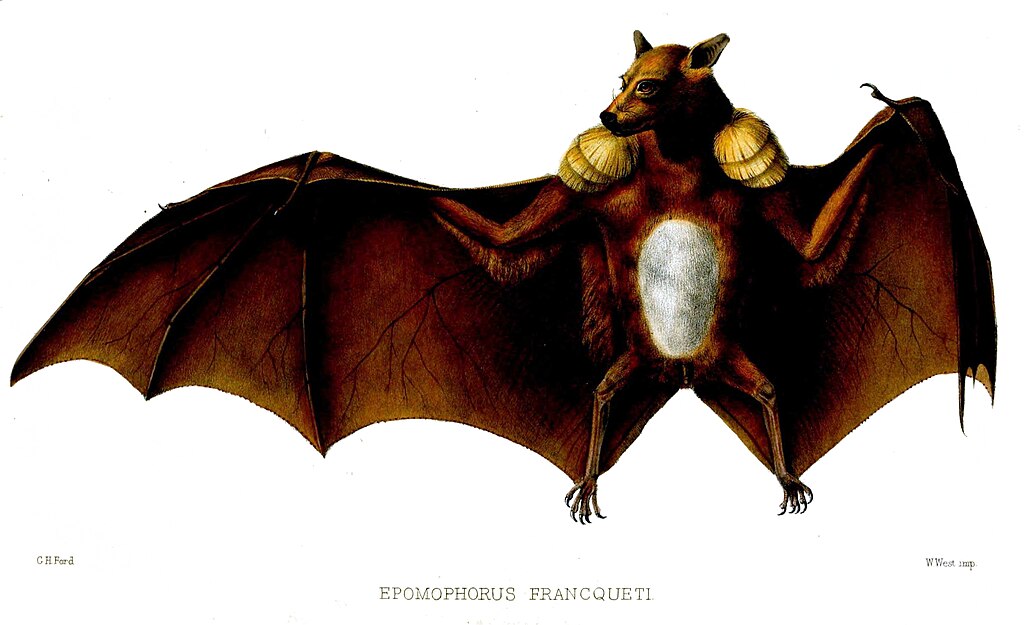 This is Franquet’s Epauletted Fruit Bat, one of three fruit bat (megabat) species to recently test positive as Ebola “disease reservoirs” (meaning they are asymptomatic animal carriers of the virus).

In other words, bats, primates and other mammals bitten by bats, apes carrying HIV, and more end up on the dinner table, inevitably bringing new mammalian diseases to the plate at least once, and all an outbreak takes is that one infected meal.

Months before the Ebola epidemic spiraled out of control, there was Patient Zero, a not-quite-two-year-old girl in Guinea. She likely contracted the virus from an infected bat, in an impoverished village where bushmeat is a dietary staple. Because Ebola so often afflicts caregivers, the child’s pregnant mother was soon infected, then other family members, then the midwife who nursed the mother through a miscarriage. Within months, the virus had arrived in the capital, Conakry, and seeded even larger epidemics in neighboring Liberia and Sierra Leone.

This is from a recent article on New Security Beat, “The Making of a Tragedy: Inequality, Mistrust, Environmental Change Drive Ebola Epidemic.”
New Security Beat is a project of the Woodrow Wilson Center, which exists to perpetuate President Wilson‘s pro-interventionist views. “Making the world safe for democracy” by pointing mega weapons at anyone deemed a tyrant or an enemy. Your “Team America: World Police“-type approach, basically, or the Freedom Eagle meme school of foreign policy. So stay alert to possible biases in this source (and all sources you may find).

Still, the article makes important points about our environmental and animal interdependencies driving the infectious diseases we’re exposed to….
It continues:

But the origins of the epidemic reach back further still. The virus may have been flushed out of the forest by multinational timber and mining operations that have clear-cut the (now misnamed) Guinea Forest Region, where the child was from. And population growth, partly driven by refugees from the brutal civil wars in Liberia and Sierra Leone, has driven settlements deeper into the remaining bush.

“As the forests disappeared,” writes Jeffrey Stern in Vanity Fair, “so too did the buffer separating humans from animals – and from the pathogens that animals harbor.” Zoonotic diseases like Ebola are on the rise worldwide, as habitat loss accelerates.

Zoonotic diseases are diseases transmissible from animals to humans or visa versa (“reverse zoonosis”).  In Jared Diamond’s best-selling book Guns, Germs, and Steel, about the non-cultural geographic and ecological reasons Western civilization developed ahead of the “Global South,” zoonosis is cited as a key reason for the Western colonizers’ germs advantage.  Europeans lived with and relied on a diverse stock of domesticated animals, so were packed with zoonotic diseases and immunities. This made early European settlers of the Americas typhoid marys as far as their impact on the indigenous peoples, effectively waging unintended (and sometimes intentional) apocalyptic biowarfare. In this Mobile Register editorial cartoon by JD Crowe, “Airborne disease,” Ebola takes flight via a sprawling swarm of bats and an airplane.

Africans, unlike Europeans, were known for their hardy resistance to tropical diseases, and therefore were enslaved en masse and deployed especially heavily to die and work plantations in the hot climes few whites would go. But historically having little to no domesticatible animals in the dense jungles of West Africa, Africans didn’t do as well with zoonotic plagues.

Now they’re facing animal-borne infectious diseases like whoa, and it is bad! And environmental destruction in West Africa is a huge factor.

Will humans ever get it through our thick skulls that what harms our mammalian cousins will inevitably affect us??

Will My Dog Catch Ebola? | Psychology Today -good solid scientific info here: dogs can become asymptomatic carriers in the period before the disease cycles out of their system, but cats appear to not be susceptible to catching the virus