This post is for Blogging Against Disablism Day, BADD, 2009.

There’s a dark part of America’s past (and present) that few are aware of: government taking children from their families and placing them in institutions.

It usually goes like this: doctors and social workers identify a disabled child, and advise the parents to send the child to an institution to get “the best of care,” from “the experts” and “be with kids like them.” Sometimes they’d recommend parents “move on with your lives.” In some cases, most of them decades ago, children were made wards of the state and whisked away from their families, for “their own good.” We’re talking about young kids here, 5-10 years old, many of which had mild disabilities, perhaps CP, MR or autism, not needing intensive supports at all.

That’s where the ablism comes in. Just because these children are different, or need some help, they’re assumed to need locking up in institutions. The doctors and social workers aren’t aware that “the experts” they’re letting raise these kids are the nurses and aides most likely to resent disability and the needs it involves (more work for them) and most likely to brutally restrict and control kids (to avert any possibility of trouble or more work for them). That means the kids will be horribly stunted: boys will never able to touch a girl’s hair, girls never able to “play doctor” with the boy across the street, and no one able to sneak an extra cookie (each meal is strictly controlled). And if they find a way to do these anyway, their reaching of these developmental milestones will be demonized; they’ll learn to hate their humanity, hate the needs and trouble their disabilities cause the staff.  They grow up in what’s essentially a special type of prison, where the natural experimentation crucial for human growth is banned. Not only are they segregated physically, they’re segregated from normal human contact, from basic experiences, from growth, from life.  While I wasn’t raised in an institution, I was exposed to this mentality, plenty. Special ed aides would grab my manual wheelchair and pull against me spinning the wheels, to prevent me from straying from them (and interacting with other children) during recess, to ensure my “safety.”

Each afternoon, at the city rehab hospital I live in, a yellow school bus pulls up out front. The bus is dropping off the institutionalized children who live here. You can’t help but wonder, “what will these children grow up to become?”  In my experience, from meeting those who moved to the community after the local institution (or “developmental center”) closed following the landmark 30-year-long Wyatt v. Stickney desegregation lawsuit, is that you can take the person out of the institution, but you can’t take the institution out of the person; their mind will, to an extent, forever be institutionalized.  They will never question authority figures, or take actions without the consent of an authority figure.  Some who got out are leading successful lives, with jobs and many things they could’ve never had in an institution (a great argument why more deinstitutionalization needs to happen NOW) but decades of success were robbed from them.  Their development was stunted, their independence has been stripped, and their mild mental differences became serious impairments, now requiring aides (they should maybe rename “developmental centers” “regression centers.”) It’s how they were trained, to be dependent.

America has set up this enormous infrastructure of segregation for people with disabilities, and it’s wrong. Why do we do this? It’s rooted in outdated, ablist ideas.  Institutionalization began in earnest in the 19th century, and picked up and expanded widely with the technology of the 20th century.  It was based on the false notions of that era, like the need to isolate the disabled in institutions far from the community in order to keep contagions at bay, put the vulnerable under care of “experts,” and the theory that “they’ll be happier around their own kind.”  The deeply-ingrained concept that “you’re different, therefore you should be segregated” is the pinnacle of bigoted ablist thinking, and it’s the underpinning of all this stuff.  And even with all these theories disproven, too many old institutions remain, sustained by inertia, special interest groups, and the lack of community-based alternatives.

It’s hard for me to blame the parents for consenting to send their kids to this fate when there are few, if any, community-based options to turn to. With little support, and confusion about what to do, it’s not surprising widespread institutionalization has happened. The state forces parents into a grim Faustian Bargain of necessity, something way too close to The Kinder Transport for America, forced to choose between sending children away, or leave them to some uncertain, horrible fate trying to raise them with no supports, no safety net.

Some families are now trying to find children lost to the gulags decades ago.

(Newstands only; article not available on the magazine’s website.)

Families across the country are searching for loved ones with disabilities who were sent away to institutions years ago, often without warning or explanation.

Kevin Hopkins, 53, of Springfield, Virginia, is seeking his stepsister Janet, who was sent to an institution 42 years ago. “She was my best friend,” he said. “I just wish I could know where she was and see her again.”

Shawna Gagnon, 49, of Montgomery, Alabama said her sister Zena (Xena) was taken to a California hospital 43 years ago “where people hollered and were tied to the beds.”

Filmmaker Jeff Daly, creator of the documentary “Where’s Molly?”, has been working to find family links for the estimated 250,000 Americans who live in group homes or state institutions with no family contacts. He and the nonprofit ArcLink have built a relative search database that has already fostered more than 100 reunions.

More institutions are closing under mounting allegations of human rights violations, but we need the community resources to make these outdated ablist models obsolete forever.  It’s obvious that the best environment for children is a natural family setting, but too many families are STILL forced to choose institutions, especially in the South (like my old home state of Alabama) where there are few community-based options to turn to.  The best thing for the child, would be to fund attendants from the community to assist the family in caring for the child in the home.  But home and community-based services (HCBS) are purely optional for state Medicaid agencies, not a mandated service under Medicaid law.  Meanwhile, it’s mandatory to fund the huge institutions that cost much more (often double or triple the expense) and (almost inevitably) neglect, set back and stifle human growth and potential.  The harsh inhumanity involved, demands change.  We are complicit in our government’s policies, and must demand better.  It’s time for the Community Choice Act, which would make providing home care mandatory for Medicaid too, and give people a real choice.  LET MY PEOPLE GO!!!

"LET MY PEOPLE GO!!" on silk, from jewishbazaar.com 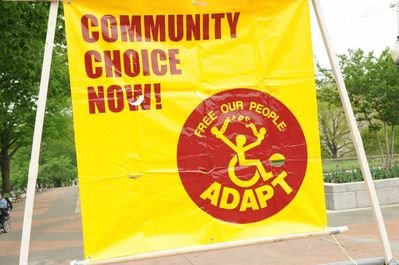 An ADAPT activist holds an "Our Homes NOT Nursing Homes" sign, at the "DUH City" Action, September 2008