Newsflash: Some New Fall TV Series Actually Worth Your Time!!

This new cop show about a unit of homicide detectives in Detroit is really intelligent and immersive. Unlike most hour-long dramas, it really immerses you in an environment, in characters, with the city (Detroit) as a character in every episode. I felt like I was really there by the river in inner-city Detroit. Yeah, the scripts lean on archetypes (the pretty girl detective, the newbie

the old black veteran on the verge of retirement, and of course the lead, the eccentric, Asperger’s-like detective Louis Fitch with an uncanny, near-mentalist knack for clues and hunches, played by Michael Imperioli) but archetypes can be helpful shortcuts to get the audience involved QUICKLY. The production team just has to make sure the writing stays fresh and engaging and insightful and that their archetypal characters don’t get stale and predictable. Lazy writing could kill the show. The writing being too intelligent could also kill the show. Now, it’s worth your time.

This is a smart legal drama with an awesome cast (the lead stars are Rob Morrow and Maura Tierney) and great, engaging, rapid-fire dialogue back and forth. The premise is that it tries to give you “the whole story” by telling the same ambiguous story and events from multiple viewpoints (the prosecutor–Tierney, and the defense–Morrow) and then ends with the big reveal of what really happened.
I liked the pilot; I was pulled in by the New York scenery and the plot involving a diabetic veteran in a wheelchair gone overboard on the Staten Island ferry (and some heavy-headed disability stereotyping they explored). If the writing stays good and keeps improving, the show has a chance to really build a big audience in the way that The Practice did for ABC, or the writing could go flat and the characters could go stale and the network will go for a midseason replacement; it’ll take pretty good ratings to pay the stars’ salaries, and good ratings aren’t guaranteed by any means. I sort of see this show as “on the bubble,” worth watching now but that could easily change.

Like the last series Greg Garcia made, My Name Is Earl, this is a comedy that really breaks the half-hour sitcom mold. No annoying laugh track, and, instead of the cliche house set, it seems to be filmed on location in real life, single-camera style in a rickety wooden home with the broken front screen door and parents (Martha Plimpton–great to see her again!–and Garret Dillahunt) who scrape by with fringe service jobs (as a maid and a pool cleaner). The stay at home mom (like Marge Simpson) is no longer realistic in today’s economic world.

Anyhow, the show’s core premise is about Jimmy, the teenage son, raising the daughter (“Hope”) he got accidentally, and that could get boring if they don’t keep the writing really sharp or stop inserting new crazy characters. But, for now, it’s probably the best, freshest new comedy on TV. Worth your time.

I like its really different premise; a guy moves to India to manage a catalog call center that just got outsourced to Mumbai. Fresh and engaging for now, and hopefully doesn’t become a stale, browner-skinned parody of The Office. Worth watching.

I really liked this show, a period piece set in Atlantic City at the dawn of Prohibition, and apparently based on the non-fiction book Boardwalk Empire: The Birth, High Times, and Corruption of Atlantic City. The elaborate sets re-creating the Atlantic City boardwalk and all the ’20s storefronts, the meticulously re-created clothing, they’re just amazing; this alone makes it worth watching. This is such a pivotal time in American history, with Prohibition, gangsters smuggling hooch from Canada, suffragettes/temperance activists, jazz, stock market boom, the roaring twenties economy, rampant individualism and materialism, rampant sex and feminine liberation and the flappers radically challenging social mores, but this era has very seldom been explored on film (with notable exceptions, like the film adaption of The Great Gatsby).

Nucky Thompson, the lead character in “Boardwalk Empire,” is directly based on real life corrupt county treasurer Nucky Johnson. He’s half politician, half gangster, and played by Steve Buscemi.

I’ve always thought this era deserved thorough exploration, for the good of American culture and understanding and etc., and man does this fit the bill; it immerses you in 1920 Atlantic City so well that you can almost smell the ocean on the boardwalk, the lush fabrics on the women and the $3 drinks. The head writer and producer is Terence Winter, one of the main Sopranos writers, and with its similar focus on gangsters, corruption, and seedy Jersey environments, the show is perfect for him, right up his alley. And it’s already equaling The Sopranos in terms of huge ratings cash cow, so, for HBO, it’s likely their “Next Sopranos.” But I think it’s also culturally significant. True, it explores a seedier side of the ’20s (it’s “anything goes” Atlantic City, any time period there is gonna be seedy) with lots of flappers flapping around as tourists, or waitresses in men suits, or showgirls in theaters as burlesque dancers, or mermaids with pasties, or geishas in a nude revue, or even flappers in straight up bordellos, but on the other hand it also subtly (but powerfully) explores Prohibition and gangsterism. When a scene takes us inside a temperance society meeting, we see the older suffragettes who advocate Prohibition, and hear the arguments about DEMON RUM (the leader recites a poem that ends “liquor, thy name’s delirium!”) But later in the pilot episode, we also see their arguments about alcoholism destroying families are well-founded; there are severe cases of deadbeat husbands who take the money needed to feed the children to buy booze, and severely batter wives who resist. Many suffragettes thus saw this social ill as a key women’s rights issue that any civilized country would respond to. But we also see how the mafia immediately perverts Prohibition to make huge profits; they start charging $3 for a glass of liquor, up from 15¢, and keep Atlantic City as drunk as ever. The pilot also (subtly) explores the issue of returning WWI veterans, Doughboys, who saw brutal combat in Europe, killing people repeatedly, and then feel murder is the only profession for them and join the violent alcohol smuggling business. I should blog more about the ’20s!

inside a temperance society meeting

My Generation – ABC, 8/7central Thursday night (prior to Grey’s Anatomy)

I loved this show; probably my favorite of the newly debuting Fall series. I’m captivated because it really is my generation, the class of 2000, and follows a group of nine friends that graduated in 2000, and traces what they said their goals are and what happened when the dreams collided with reality. They’re 28 now (same as me) and the series is slowly unraveling what happened to them since 2000, uncovering secrets and their effect on the present. It’s shot in documentary style; for the first 30mins, I thought it really was a documentary! I didn’t recognize any of the actors, so that didn’t break the illusion; only when I realized that we can hear the characters’ phone conversations and other things beyond the reach of a real documentary film crew, did I figure it out.

True, the show uses archetypes, and some people don’t like that, but it uses the archetypes really explicitly, with what archetype they are printed on the screen even! There’s Anders “The Rich Kid,” Brenda “The Brain,” Kenneth “The Nerd,” Steven “The Over-Achiever,” etc. And the core of the show is really playing off the labels that they had in high school and exploring how those work once reality hits. Steven “The Over-Achiever” is an example; it turned out that his overachieving was mostly due to abusive pressuring from his dad, who ended up jailed as one of the corporate criminals from Enron. Once his dad’s assets were frozen by the courts, Steven couldn’t pay tuition at Yale anymore, and dropped out. Instead of adapting, Steven pretty much dropped out of society, becoming a loser beach bum surfing in Hawaii, bartending to earn a living and having meaningless, anonymous sex with tourists; he really hit rock bottom. 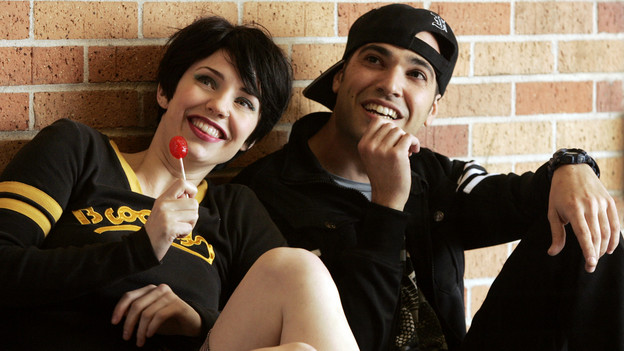 Dawn Barbuso "The Punk," and Falcon "The Rock Star"

I’ve really gotten wrapped up in the 9 characters, I’m captivated, on the edge of my seat to find out what happens to them next. Maybe that’s because I long to connect with my real class of 2000 peers. What will happen/what’s happening to my HS Class of 2000/college class of 2004, the heart of the Millennial Generation? Did most of us find love and success? will we save the country like they always said? This show is all about exploring these issues; it’s the premise that really grabs me.
I really hope they don’t cancel it, but all the signs of axing are present….it’s not fast paced or action packed, it’s in-depth and intelligent and character development…could be doomed. UPDATE …and, I was right; ABC has already canceled My Generation.  ugh.

You’ll notice that ABC has the lion’s share of “worth watching” new pilots. This has little to do with ABC being awesome (it isn’t really) and a lot to do with all the other networks SUCKING. They really stunk up the place.

For more about this, see my next post: What New Fall TV Shows To Avoid (2010)

If you have other shows or other things you want me to review, put it in the comments!