Sometimes a normal female bottlenose dolphin (typically 300-600 lbs.) mates with one of the biggest species in the dolphin family, the false killer whale (not really a whale, hence “false,” but being 4,000 lbs., the size of an orca, and having similar coloration, is easily mistaken as one from a distance). I’m talking about freaky-deeky cross species mating.

A false killer whale and a bottlenose dolphin sharing a tank.

The resulting offspring: a wholphin.

This is a girlWholpin at Sea Life Park Hawaii named Kekaimalu. The first known wholphin in the world, born 1985. 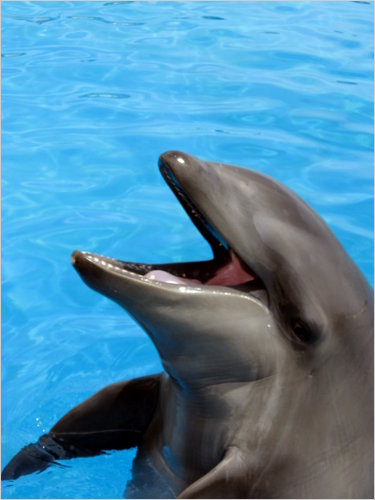 Scientists assumed that wholphins would be sterile like other hybridized mammals like mules and zorses, who can’t reproduce because their odd number of chromosomes prevent meiosis. But they were wrong.  Keikaimalu shocked researchers when she began mating with dolphins and having babies, not one but three pregnancies. Her first two calves never thrived and never nursed, and didn’t survive (though the second lived 9 years). Her third calf, a wholphin daughter named Kawili Kai, was born December 24, 2004, and immediately began nursing and has been very healthy, playful and vigorous from the start. Kawili Kai’s father is a bottlenose dolphin, making her 3/4 dolphin and 1/4 false killer whale, so she’s much more dolphin in appearance than her mom Keikaimalu; Kawili Kai looks more like a darker complexioned, super-jumbo bottlenose dolphin, passing the size of most bottlenoses a year after birth. But she has incredible whale eyes; click for a close up.

One of nature’s weirdest hybrids, wholphins are between the parent species in weight (600 lbs–double her mom’s size) in coloration, in length (10 ft) and even in number of teeth (66, while a bottlenose has 88 teeth and a false killer whale has 44 teeth).

Keikaimalu and Kawili Kai are the only wholphins in captivity, but wholphins have been documented in the wild too, No one knows how many are existent in the wild, they are incredibly rare. But sometimes it does happen.

A Wolphin Celebrates Her Tenth Birthday! (from 1995, about Kekaimalu’s 10th birthday. Her second calf was still alive then)

A Wholphin Is Born (about Kawili Kai’s birth. brief CBS News video of the wholphins)