Do The Orwellian Police State Cha-Cha!!

Last week, like the careful student of political science I am, I was reading the full text of the Pledge to America, the new policy platform for the GOP’s Fall Election campaign…
The thing that disturbed me the most is that the text so emphasizes the Constitution and a return to the Constitution, all this restoration language, 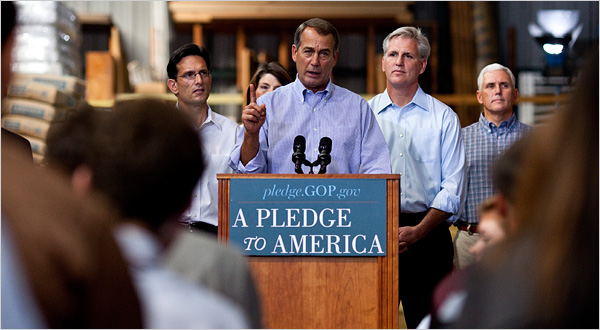 but despite unprecedented law enforcement overreach in recent years, COMPLETELY IGNORES civil liberties (Bill of Rights, Amendments 1, 3, 4, 5, 6, 7, 8, etc)!! The text explicitly mentions the Tenth Amendment, and of course they’re all about THE RIGHT TO OWN A GUN (even automatics, heavy weapons, bazookas, RPGs, etc) but evidently the rest of the Bill of Rights simply doesn’t exist!

Does no Republican behind this pledge think of civil liberties as part of the Constitution?

The Ninth Circuit Court of Appeals (in California) just ruled that police placing tracking devices on cars in private driveways is totally legal because “there’s no expectation of privacy in driveways.” Unless you’re rich and can lock your vehicle in a garage or behind a fence with private security guards, that is.

Government agents can sneak onto your property in the middle of the night, put a GPS device on the bottom of your car and keep track of everywhere you go. This doesn’t violate your Fourth Amendment rights, because you do not have any reasonable expectation of privacy in your own driveway — and no reasonable expectation that the government isn’t tracking your movements.

That is the bizarre — and scary — rule that now applies in California and eight other Western states. The U.S. Court of Appeals for the Ninth Circuit, which covers this vast jurisdiction, recently decided the government can monitor you in this way virtually anytime it wants — with no need for a search warrant.

It is a dangerous decision — one that, as the dissenting judges warned, could turn America into the sort of totalitarian state imagined by George Orwell. It is particularly offensive because the judges added insult to injury with some shocking class bias: the little personal privacy that still exists, the court suggested, should belong mainly to the rich.

This case began in 2007, when Drug Enforcement Administration (DEA) agents decided to monitor Juan Pineda-Moreno, an Oregon resident who they suspected was growing marijuana. They snuck onto his property in the middle of the night and found his Jeep in his driveway, a few feet from his trailer home. Then they attached a GPS tracking device to the vehicle’s underside.

After Pineda-Moreno challenged the DEA’s actions, a three-judge panel of the Ninth Circuit ruled in January that it was all perfectly legal. More disturbingly, a larger group of judges on the circuit, who were subsequently asked to reconsider the ruling, decided this month to let it stand. (Pineda-Moreno has pleaded guilty conditionally to conspiracy to manufacture marijuana and manufacturing marijuana while appealing the denial of his motion to suppress evidence obtained with the help of GPS.)

Excerpted from: The Government’s New Right To Track Your Every Move With GPS – TIME

Neither Team Donkey nor Team Elephant have expressed the slightest concern. Not a word. This editorial cartoon by Adam Zyglis depicts President Obama as Uncle Sam in one of those WWII-era Army recruitment posters, but with the banner "I HEAR YOU," and the words "Expanded Surveillance" printed on his big ears.

Not a word either concerning the new FBI/Obama Administration proposal to make every data method tappable and un-encryptable!!!

To counter such problems, officials are coalescing around several of the proposal’s likely requirements:

“It would be an enormous change for newly covered companies,” he said. “Implementation would be a huge technology and security headache, and the investigative burden and costs will shift to providers.”

Several privacy and technology advocates argued that requiring interception capabilities would create holes that would inevitably be exploited by hackers.

Steven M. Bellovin, a Columbia University computer science professor, pointed to an episode in Greece: In 2005, it was discovered that hackers had taken advantage of a legally mandated wiretap function to spy on top officials’ phones, including the prime minister’s.

“I think it’s a disaster waiting to happen,” he said. “If they start building in all these back doors, they will be exploited.”

“Every engineer who is developing the wiretap system is an engineer who is not building in greater security, more features, or getting the product out faster,” she said.

Moreover, providers of services featuring user-to-user encryption are likely to object to watering it down. Similarly, in the late 1990s, encryption makers fought off a proposal to require them to include a back door enabling wiretapping, arguing it would cripple their products in the global market.

But law enforcement officials rejected such arguments. They said including an interception capability from the start was less likely to inadvertently create security holes than retrofitting it after receiving a wiretap order.

They also noted that critics predicted that the 1994 law would impede cellphone innovation, but that technology continued to improve. And their envisioned decryption mandate is modest, they contended, because service providers — not the government — would hold the key.

“No one should be promising their customers that they will thumb their nose at a U.S. court order,” Ms. Caproni said. “They can promise strong encryption. They just need to figure out how they can provide us plain text.”

Excerpted from: U.S. Tries to Make It Easier to Wiretap the Internet – NYTimes.com

In a normative political system, we would have an opposition party to oppose these kinds of outrageous excesses; part of any political system is supposed to be the people raising cain when there are rights violations, but neither party gives us an outlet for that. Right now, the Republican party is supposed to be the opposition party; that’s why I brought up the “Pledge to America.” But they don’t oppose unlimited surveillance and limited civil liberties, in fact, they’re like “bahbah-bahbahBAAHH, I’m lovin’ it!!” Even though they’re calling for a return to the Constitution, they’re acting like the Bill of Rights doesn’t include civil liberties of any sort (other than gun rights).

In the Republican party’s defense, we expect Republicans to be the authoritarian police state party, they are supposed to have that Big Brother ideology. And, in opposition, the Democratic party is supposed to be chock-full of “card-carrying members of the ACLU” who stand up for civil liberties and defend all forms of art (even pornography) and freedom of speech and privacy in the Bill of Rights, etc. The problem is how the Democrats have completely caved and sold out on their traditional positions. Why? Just so they’re not labeled “unserious” and barred from the good parties in a post-9/11 neoliberal authoritarian climate? How did we, the American people, divinely-appointed guardians of human freedom around the world, allow it to go so far?

Right now, there is NO opposition party against America sliding into an Orwellian police state. If we’re to keep the U.S. a Republic in any sense, that has to change!

An image with Benjamin Franklin and his famous quote "Any society that would give up a little liberty to gain a little security will deserve neither and lose both."