The Cost of Denial For People with Disabilities

The last statement in the radio segment about my blog was Josie Byzek saying that (my paraphrasing) the Tea Party may win big in the midterm elections, but then there could be a backlash at the ballots in two years (in the 2012 elections).
I don’t think the problem of inadequate services for people with disabilities will just go away with a political pendulum swing in two years. The dramatic changes that have already happened and will keep happening will ensure that these monkeys stay on our backs; because we squandered the budget for so many years on tax cuts and wars, budgetary realities will force severe benefit cuts, even if you had a 100% Dem Congress. No Congress will be able to govern in the way we’d all like, because of these very severe budgetary and political realities. Yes, part of the political reality is the Tea Party; those Tea Party activists and candidates who embrace an extreme form of Randism are more comfortable with disabled people’s blood on their hands than any political group has been in my lifetime; they’re completely comfortable demonizing people on public benefits as “robbers,” “leeches” and “parasites” and (I would argue) they’re completely irreconcilable with Judeo-Christian morality. Tea Party candidates and their Rand philosophy will be shaping the debate and helping define what is achievable legislatively like never before, and people with disabilities need to know about this, educate themselves, because this is a force that will affect our lives. But overlaying that is the larger problem of “we outta money.”

In this Dave Granlund cartoon, poor jobless people with a HELP sign reach out to Uncle Sam, but he just pulls out his empty pockets and says "I was going to ask you the same."

We’ll be paying the price for decades for the decision to try and pay for two simultaneous wars with tax cuts and “just go shopping!” and paying for it in numerous ways, some very painful. We gotta pay the piper, and we’ve run up a huuuuuuge tab. If history tells us anything, it’s that the tab is always borne by the poor and disabled, the most vulnerable and least able to pour money into campaigns to fight back.

Josie Byzek herself touched on the budgetary realities when mentioning sales tax revenue that helps fund state Medicaid isn’t the same anymore, the bottom fell out. We’ve got *apocalyptic* job loss, the last of the manufacturing sector exiting en masse, etc. Those hardhat-type 9-5 jobs won’t be coming back and you’d have to visit China to see them. The information tech world will be the source of jobs, but it hasn’t adapted and kept up enough to provide that yet, and it may be another lifetime before that happens. This will be a really ugly transition. This Concord Coalition graph shows how Medicare, Medicaid and Social Security, in addition to interest on our enormous debt, continue to bloat the budget by % of GDP. In order to sustain benefit spending, we would need to HUGELY grow the economy, but currently, it's shrinking. Terrible choices are coming soon.

I’m arguing that technology, the economy, and politics are drastically shifting, and Medicare and Medicaid will soon change BIG TIME, so disability community leaders need to get in front of this and negotiate hard for the services we want to preserve most, because a lot of them ARE going away, and we have to get out of denial and start coping and adapting NOW! Catastrophic institutionalization, re-segregation, will happen unless we acknowledge that economic and budgetary realities mean that a lot of services are inevitably going away and negotiate hard for keeping select services we can’t go without (i.e. HCBS, Home and Community Based Services) using a cost-effectiveness argument. Congress won’t give a damn about us, but will care about cost if we make the case.

and y’know how Obama’s health reform bill increases Medicaid eligibility? It gives subsidies to help pay for the increased enrollment, but that enhanced FMAP is temporary. Then what? Then FAIL!! I’ve written about this in detail here; the eligibility mandates will hit the poorest states the hardest and they are already slashing programs to the bone to the extent they’re leaving us in our own waste. Once the eligibility mandates fully take effect in 2014, will the poorest states have to drop most care for people with disabilities? They could have to dump the people most in need, in favor of reshaping their programs to bring them in line with the new requirements, i.e. providing major medical coverage to low-income (able-bodied) adults. This is one of the worst parts of health “reform,” so very disconnected from the needs on the ground and the harsh realities we face. 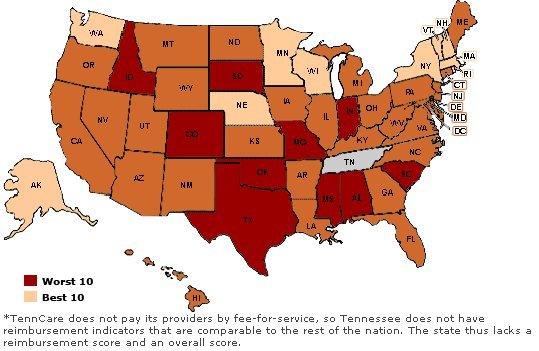 This is a map of the worst and best Medicaid agencies in the U.S., with the reddest being the worst, and the lightest being the best. What I'm telling you is, this map will soon get much, much redder across the country.

In light of the situation, we need to be having conversations like “yes, we know that Medicaid dentistry and ophthalmology and free eyeglasses and prosthetics and leg braces and numerous things we’re accustomed to are going away, but we have to protect HCBS or the nursing facilities will cost the states EVEN MORE.”

We can’t afford the COST OF DENIAL. We can’t stay in denial that benefits will be changing; we can’t stay complacent! I’m saying WAKE UP, the societal, technological, economic and political changes are so great that benefits will be changing dramatically, and we aren’t prepared and we aren’t identifying priority areas to protect because there is an unwillingness to sacrifice ANYTHING, so Congress will likely cut EVERYTHING. Failure to get in front of this thing, staying in denial, will mean Congress will just impose 20% or 30% austerity across the board on all departments without understanding the issues involved.