That Time Mobile, AL Made The Front Page of the New York Times

And how The Times missed the story

It’s not exactly surprising that the New York Times missed the story: their writers too often cling to conventional wisdom like a drunk grabbing a lamppost, not for illumination as much as desperately-needed support.  Don’t get me wrong, the Times sometimes has great coverage and is valuable as one of the few newspapers doing fact-checked, traditional journalism, and one of the last old-guard newspapers still standing, but their coverage of the American South is consistently abysmal. It’s nearly as clueless as their coverage of disability issues.  When it comes to the South, the NYT writers are like most New Yorkers, they hear “Alabama” and can picture only the cornfield backdrop on that show Hee-haw!  The problem is, despite the reality being more crawdad than cornfield, more riveria than rural, you can get through this front page report on Alabama’s First Congressional district primary run-off with the image of the rural cornfields unperturbed.

The front page story, well, it was actually a prominent front page blurb in Wednesday, November 6th—print, web, and app—New York editions then continued inside (or on page A17) with the headline: Byrne Wins Republican Runoff in Alabama House Race, was seen nearly 100% through the DC pundits’ lens:

… But the race to replace Mr. Bonner became a national proxy fight between the ideological wings of the Republican Party after Mr. Byrne and Mr. Young emerged atop a nine-candidate field in a September primary.

Dean Young, the Tea Party challenger, did see the race as an epic struggle: his defiant election night “concession speech” ominously referred to his loss as “the first warning shot that goes out across the nation,” and the beginning of his national movement. Byrne, to his credit, tried to explain to the media.that the race was actually about representing Mobile Bay area interests in the House.  This is why he won. (I’d say Jo Bonner won too, abruptly retiring a few weeks before the tsunami of filth from the shameful government shutdown hit)

City of Mobile’s stunning waterfront, backed by blood oranges and cinnamon-sunset. Tip of the hat to Ronald Cook for sharing this beautiful cityscape, originally captured by photographer Tim Ard.

The New York Times missed the story because they missed Mobile.  After the dateline, MOBILE, Ala—pronounced MoBEAL, my hometown—they don’t mention the city again and don’t interview anyone in the city, though Mobilians are the bulk of the voters in the First district, and thus decide the election.  At minimum, The Times has deprived readers of the context that explains why Bryne won: Mobile.

Bradley Byrne didn’t win because voters sided with the “Republican establishment” vs. the Tea Party, as The Times suggested.  Byrne won because he’s more like his predecessors, Jo Bonner and Sonny Callahan, who were laser-focused on getting federal earmarks, grants, and infrastructure projects for the city and the area economy, and made “bringing home the bacon,” not ideological warfare, job 1.  Dean Young might have won in a purely rural district with his pledges to “be just like Ted Cruz,” but far-right crusaders will never get much traction in districts like the First, where an urban population center supplies much of the vote… in this case, Mobile is also a port city trying to compete with similarly-sized ports (like Charleston) and needs the pipe of infrastructure funding open and flowing in order to have a chance.

You see, the true story of Mobile and the Mobile Bay area is infinitely more layered, diverse, and beautiful than the stereotypes or The Times’ one line descriptor “the deeply conservative district.”  The city of Mobile is over 300 years old: it’s called “the city under six flags” because of its rich history 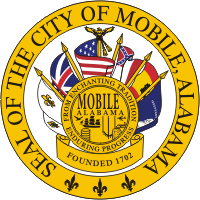 Seal of the city of Mobile

of being under France, Spain, Britain, Republic of West Florida (nominally), United States, and the Confederacy. These flags are on the city seal, including the bonnie blue flag of the Republic of West Florida, a 90 day secession in 1810…  though Mobile remained de facto under Spanish colonial rule, this Republic also included Pensacola and Baton Rouge.  The secession was crushed and all the territory therein forcibly incorporated into the U.S. by Andrew Jackson’s troops during the Madison administration.

Mobilians’ historical and socio-economic background, the collective subconscious, draws more on the statist-war economy under the Confederacy and the mercantilism of the French, Spanish, and British periods—I’ll write a post on Mobile and mercantilism—than the free market American image.  European colonies like Mobile and New Orleans didn’t really ever have the “wild west capitalism” or “free enterprise system” that politicians often say that they want to get back to, it never happened.  Whether you are Republican or Democrat in Mobile—and the word “Democrat” means something different in the Alabama context where the history includes George Wallace-style Democrats—you’re not automatically against state intervention, especially when it means some “bacon” for the local economy.

With the Democratic win in the recent Virginia gubernatorial election November 5th, some have said that Virginia’s election must’ve been rigged or unfair somehow because Cuccinelli won more counties, and the electoral-result map shows Virginia as a sea of red with a few islands of blue.  Dave Weigel blogged about this, renewing discussion of islands of blue where the urban population centers—and decisive voting blocs—are, and electoral maps.  Since, the blogosphere has lit up with discussions of the best electoral maps and cartograms.  Political science professor John Sides posted an excellent compilation of some of the best cartograms that have been created in recent days on his blog The Monkey Cage: the map that most accurately reflects Mobile and American voters as a whole is this one by Chris Howard, which corrects for population using relative darkness/lightness of the blue and red and purple.  In it, Mobile county is purple.

It’s unfortunate that The Times substituted the canned, pre-determined “Republican establishment vs. the Tea Party” narrative for the truth that it’s a purple district where the more moderate, bacon-bringing candidate has a natural advantage, and all politics are local.  They mangle the story, not from falsehoods, but from missing the point.  I understand the limited space in newspapers, but a few lines of context would have made all the difference.

Mobile city was part of New France… in the discussion of the 11 nations or political cultures that rub up against each other in North America being frequently blogged about too recently, Mobile should be categorized with “New France.”  The real Mobile is lost in the shuffle, kind of how the redistricting loses the city…

As you see in the map of the First Congressional district, they’ve included the hinterland counties to create a balance of rural and urban voters. Balanced districts like these are rare. And maybe they shouldn’t exist: so many rural areas are included here, the Mobilians are nearly canceled out.  Back when the Democrats held Montgomery—in the late ’90s and mid ’00s—there was discussion of drawing a new Mobile-only Congressional district.  This could have meant real representation for Mobile and Mobilians’ urban interests, a constituency that is 51% black and heavily Catholic, a very different person sent to Congress, and some misconceptions about coastal Alabama shattered in Washington.  We should remember this when discussing redistricting.

The one time my hometown makes The New York Times, and not for hurricane destruction, they gotta mangle it.  Dang it….