Guess who showed up in my city today ? 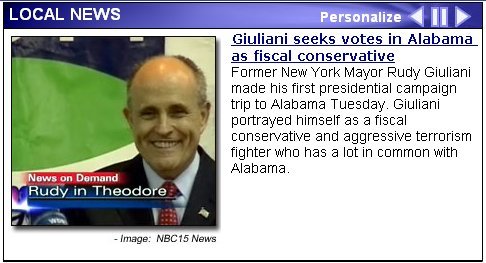 Today Candidate Giuliani showed up here. As far as I know he didn’t meet with any real people, any disability or elderly groups, nor did he visit the parts of the county that were devastated by Hurricane Katrina.

What he did do was speak at a $1,000 per plate fundraising dinner in Theodore, a nearby wealthy exurb. He also spoke at the State Capitol.

Not that other candidates are much better. Most of the candidates, both Republicans and Democrats, are only talking to the uber rich who are contributing to them (*cough* bribing). It’s no wonder most young people feel apathetic and disengaged from politics. It really IS depressing, and the current legalized bribery makes everyday (read: poor) people feel they can’t possibly be heard. I don’t blame people for being cynical.

The system is huuuuuuuuuuurting us.

It’s past time for democracy funding, to publicly-fund our elections so that corporations don’t own the system lock-stock-and-barrel. It is way cheaper than the current system of corruption.