Okay, we have a President of The United States of America, leader of the free world, who is pulling out all the stops to get a bill allowing more leeway on torture through Congress. This should be incredibly shocking to all of you. This post is Nick ranting about how evil torture is.

Let me lay down the facts, something you don’t get straight from our soundbite news media:

This should be elementary school-level knowledge. It’s what our founders died for in the Revolutionary War.

In war-time the seperation of powers are not suspended, and the president can never assume all powers, overriding all other branches of government, despite what the Bush Justice Dept. people say. Congress decides what our laws are going to be, and they adopted the Geneva Conventions in 1949. So, on June 30, the Supreme Court ruled in the Hamdan v. Rumsfeld case that the president’s secret detainee tribunals are unconstitutional, and told him to either try terrorists under existing law, or get Congress to write a new law for it (Washington Post article).

There’s a century or so of case law defining what outrages on human dignity mean Mr. President, and you would look it up if it served your cause. It doesn’t of course, and even a cursory glance at our laws would yank away any fig leaf of legality propping up our dubious “alternative interrogation techniques.”

Stephen Colbert, who does wicked satire along the lines of Jonathan Swift’s “A Modest Proposal,” takes on the topic here, suggesting the Geneva Conventions are as vague as a Lewis Caroll verse and if Bush would show us how he defines torture, we’d see his position with perfect “clarity.” 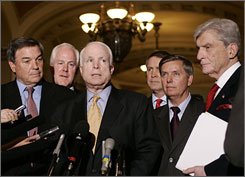 Torture is immoral under every religion!
Yet, the Religious Right is backing torture like no one else! Molly Ivins reports that “the Rev. Louis Sheldon of the Traditional Values Coalition is so in favor of torture he told McCain that the senator either supports the torture bill or he can forget about the evangelical Christian vote. I’d like to see an evangelical vote on that one. I don’t know how Sheldon defines traditional values, but deliberately inflicting terrible physical pain or stress on someone who is completely helpless strikes me as … well, torture. And, um, wrong.” Wow, traditional values = torture? The followers of Christ are all about the torture? What Bible are they reading? Are they figuring since Jesus got tortured on the cross, it’s okay, it’s trendy, what is the justification here? How does torture jive with “love your neighbor as yourself?” This just illustrates so boldly how very disconnected American Christiandom is with the true message of the “Prince of Peace.” Who Would Jesus Torture?

Many say we have to do whatever it takes, without restraint, to protect our families from a savage enemy who uses acts of unprecedented brutality. They say we cannot “show weakness” in this “new era.” They are wrong. Nothing shows weakness more than shedding our values in the face of terrorism, something the generation of Pearl Harbor, who, despite fighting a far more dangerous foe, could not fathom. This is the bottom line: giving up our high ideals to protect our high ideals from terrorism, ideals we no longer have if we surrender them in our battle, is plainly nonsensical and should end. There is no justification for losing American values to protect American values.

Filed Under: Politics and Government