Question: In light of Obama’s plan to expand Medicaid eligibility, is anyone in Congress noticing the MASSIVE state budget cuts to Medicaid across the country and ruminating about how that jives with this impending expansion? I fear that if states have to raise income eligibility and bring millions of uninsured onto the Medicaid rolls, that will mean even deeper cuts in “optional” home care programs to pay for the expansion, and even more people with disabilities’ dreams shattered.

I wish Congress would have put protecting the most disabled Americans ahead of uninsured able-bodied people, but they didn’t. For Congress, people like me are invisible.

The states slashing Medicaid the deepest (the Southern states) are the ones that will see the most new Medicaid eligibles thanks to “Health Care Reform.” 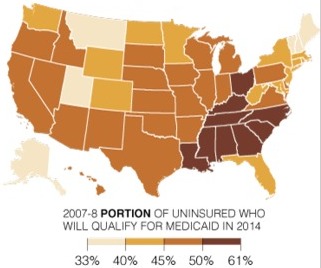 That means life for people with disabilities in the South is about to get even worse. Good thing I fled Alabama.

Medicaid, especially in the South, is increasingly in tatters. State Medicaid programs were slashed to the bone in the 90s thanks to “the Republican Revolution” and now there’s no fat left to trim, so they’re taking chainsaws to muscle and bone.

In the Wall Street Journal, it discusses a woman who’s had to sit in her own waste all day thanks to state budget cuts. I suppose the state hoped her bed sores and inevitable sepsis take her quickly, otherwise Medicaid will be on the hook for expensive hospital stays that would dwarf the cost of just leaving her f#$%ing home care uncut in the first place. I’ve seen this happen over and over again to people I fight for. It’s left me scarred to depths few of you could ever understand.

Born with cerebral palsy, Ms. Hickey, now 67 years old, is confined to a motorized wheelchair. She lives alone and relies on certified nurse’s assistants to get her in and out of bed, bathed, clothed and fed.

In December, she received a letter from the South Carolina Department of Special Needs and Disabilities, saying her weekly 50 hours of personal-care help was being cut to 28 hours. That meant Ms. Hickey would get help for two hours in the morning and two hours at night. If she needed to use the bathroom in between, she would sit in a soiled diaper.

After several days of reduced care, the local office of the South Carolina Legal Services appealed the cuts on behalf of Ms. Hickey. Her hours have been restored pending the appeal.

Home health care—funded largely by Medicaid—generally costs less money than institutionalizing developmentally disabled people like Ms. Hickey. But the political reality is that it’s easier to cut back home services than to close a 24-hour facility, which can leave people with nowhere to go. Thus, some of the biggest cuts around the country are happening in the basic services that help the disabled cope at home.

South Carolina says it has little choice but to cut funding for Medicaid. It faced a $563 million deficit for the current fiscal year, and like other states must have a balanced budget. Medicaid, the joint federal-state health-insurance program for the poor and disabled, already consumes about 20% of its $5 billion budget and is one of its fastest growing costs.

The health-care program is on course to consume 40% of the budget of South Carolina in five years, and leaves little for anything else, says Gov. Mark Sanford. “It could force legislators to either cut further into bone in the areas of education, law enforcement and economic development, or raise taxes. Neither option is palatable.”

The state already is making painful cuts elsewhere. The state’s Department of Juvenile Justice has closed five group homes and cut 25 after-school programs. There are 1,000 fewer public-education teachers this school year than last.

Across the country, budget-strapped states are focusing on Medicaid. Created in 1965, it is now a $379 billion program, including state and federal funds. State spending grew an average 7.9% in fiscal 2009 as the economic crisis hit and more people signed up for Medicaid.

It was the highest growth rate since the last downturn six years ago. Spending is expected to keep growing at that pace for the next decade because of rising costs and growing enrollment.

But states don’t have much flexibility when it comes to what they can and can’t cut inside Medicaid. Although it is a state-managed system, the federal government pays a percentage of each state’s total costs and makes many of the Medicaid rules. Under federal Medicaid law, states must offer inpatient and outpatient hospital care, X-rays and lab services. They also have to cover nursing-home services and meet certain standards, such as staffing ratios.

There are further constraints this year. States can’t reduce Medicaid eligibility this year because of a condition attached to federal stimulus money, and under health-care reform, they can’t eliminate existing programs.

States also run up against other laws when they make deep cuts. Lawsuits have been filed in South Carolina, Florida, Connecticut, Virginia, Mississippi and New York, claiming Medicaid cuts make it impossible for those with disabilities to live at home and that it violates the Americans with Disabilities Act.
(I know the lawyers behind this class action. I say RIGHT ON!!!!)

Logically, states would cut the most expensive, least efficient services and keep the most cost-effective. But because of mandates and the need to save money quickly, that isn’t as easy as it sounds.

For example, home care—because relatives often provide some of the care—is generally cheaper than housing people with developmental disabilities in institutional facilities. In 1993, the average Medicaid cost for each person with disabilities was $48,500. At the end of 2008, the latest figures available, it cost an average $55,000. Adjusted for inflation, that actually represents a 23% decrease, largely as a result of more services being shifted away from costly institutions to the home, says Charlie Lakin, director of a University of Minnesota program that tracks services for the developmentally disabled.

But many in-home services, though critical to those receiving them, are optional. Furthermore, there aren’t many minimum standards set for in-home services, so it’s easier to cut them without violating funding requirements. There are fewer immediate consequences for the state when it cuts those services because families won’t generally abandon disabled relatives and leave states on the hook for housing.

Cutting home care could ultimately prove penny-wise and pound-foolish, however. It could push more people into institutions or large group homes because that is where services are guaranteed, even though institutional care is more expensive.

The department’s fiscal problems have been exacerbated by past spending decisions. A special state audit released in December 2008 showed that the department hadn’t provided many new services for which it had received funding and, as a result, it couldn’t recoup millions in federal matching Medicaid dollars. For example, the state spent less than $700,000 of $10 million allocated to serve autistic children, which resulted in the loss of $13.6 million in federal matching money. The state said it couldn’t ramp up the program fast enough because it couldn’t find qualified service providers. After the audit, the executive director of the department and four of the department’s seven commissioners resigned. The department has since implemented most of the recommendations made by the Legislative Audit Council.
(This same thing nearly happened with the NHTD –Nursing Home Transition & Diversion– waiver here in New York: the bureaucracy imposed on providers was SO ridiculous than very few participated, and the rules were so cumbersome for patients that, in the program’s first two years, only one patient downstate–me–transitioned home from a facility!)

Recent state cuts have targeted developmentally disabled people living at home. In December, families were told that some of their in-home support was being cut by as much as half.

Brian Phillips, a 37-year-old with cerebral palsy, was told that he was losing half of his personal-care hours. He can work a TV with a remote control but can’t dress or feed himself, or get in and out of his bed or wheelchair.

He lives alone with his father, James, 70. The elder Mr. Phillips, who has had open heart surgery and whose heart functions at only 26% of its capacity, cannot lift Brian on his own. He appealed the cuts and the hours were restored pending his appeal.

People will generally do what they must to keep their disabled family member at home regardless of the cuts. At some point, however, even the most dedicated may not be able to continue, especially as their own health deteriorates.

In Aiken County, Board of Disabilities Executive Director Ralph Courtney says waiting lists for services are growing. There are more than 5,000 on waiting lists for various services, from residential programs to in-home programs.

“We want to give families hope to keep their family unit together, but in reality there is very little we can put in place to assist them,” says Mr. Courtney.

In-home support is cheaper, he says, than the alternative: group homes and larger residential programs that need to be maintained and staffed 24 hours a day. “But you can’t put people out on the street,” he says. “You can cut in-home support.”

Even though Ms. Hickey lives alone and needs help with nearly every aspect of daily living, it cost less to have her live in a house with 50 hours of personal care help than in a nursing home. Institutional care in South Carolina costs about $100,000 per person a year, compared to $39,000 for home and community services, according to the University of Minnesota research.

How does littering the entire country with families destroyed by Medicaid cuts, jive with HEALTH CARE REFORM?

Honestly, I have gotten so many hate messages over the years, I’m now convinced that the Americans will continue to react with cold indifference, or, worse, celebration–“good riddance! No one is gonna force me to pay for you useless leeches!”–as Medicaid policy continues to cull out people with disabilities like me, UNABATED.

And you wonder why I’m so angry that I’d consider reconstructing the U.S. entirely? It’s because my every day experience involves the above Kafkaesque Medicaid policies harming me or the people I care about!