The Pope gave an academic lecture on “Faith and Reason” in which he says violence in the name of G-d is unreasonable, and he touched on a Byzantine Emperor’s quote blasting the idea of Jihad. Incredibly, this has spurred a massive round of protests and violent reprisals.

If you read him in context, what the Pope is saying is laudable, that violence in the name of G-d is always unacceptable.

In the seventh conversation edited by Professor Khoury, the emperor touches on the theme of the holy war. The emperor must have known that surah 2, 256 reads: “There is no compulsion in religion”. According to the experts, this is one of the suras of the early period, when Mohammed was still powerless and under threat. But naturally the emperor also knew the instructions, developed later and recorded in the Qur’an, concerning holy war. Without descending to details, such as the difference in treatment accorded to those who have the “Book” and the “infidels”, he addresses his interlocutor with a startling brusqueness on the central question about the relationship between religion and violence in general, saying: “Show me just what Mohammed brought that was new, and there you will find things only evil and inhuman, such as his command to spread by the sword the faith he preached”. The emperor, after having expressed himself so forcefully, goes on to explain in detail the reasons why spreading the faith through violence is something unreasonable. Violence is incompatible with the nature of God and the nature of the soul. “God”, he says, “is not pleased by blood – and not acting reasonably is contrary to God’s nature. Faith is born of the soul, not the body. Whoever would lead someone to faith needs the ability to speak well and to reason properly, without violence and threats… To convince a reasonable soul, one does not need a strong arm, or weapons of any kind, or any other means of threatening a person with death… The decisive statement in this argument against violent conversion is this: not to act in accordance with reason is contrary to God’s nature.

You can read the full text of the speech here at the Vatican web site.

That the Pope trying to argue against forced conversion and for rationality and peace gets such an irrational backlash from the Muslim world just makes me angry at the Muslim world.

Those seeking to inflame the Arab street pulled “Islam is evil and inhuman” from the speech, totally out of context. And just awful reactions have happened.

Isn’t religious and intellectual freedom of expression without fear of getting murdered, a very important thing?

Where are the moderate voices within Islam? Do they exist?

There’s no way for me to relate to this. 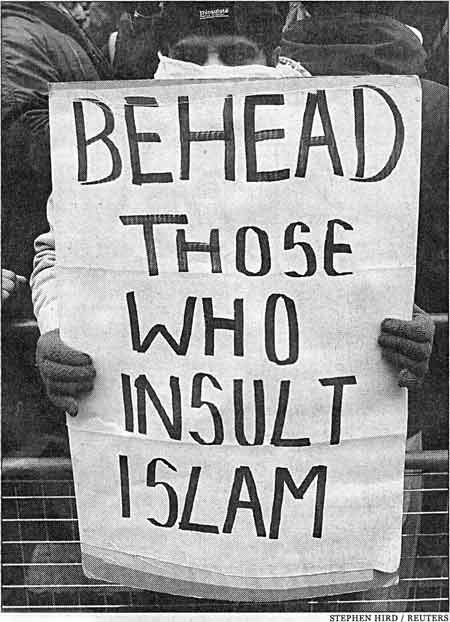 Yeah, “behead those who say Islam is violent!” kinda proves the accusations that you’re violent.

Dear Islamic world: Rioting and killing whenever anyone criticizes you is way, way worse defamation of Muslims than any cartoon or speech could ever be.