In the 2013-2014 period, states must decide whether to opt-in or opt-out of the “Medicaid expansion.”

Though it pains me deeply that the Affordable Care Act doesn’t fix any of the problems within Medicaid, even the most egregious, lethal flaws, I do understand how important the Medicaid expansion is, especially in the Southern states. The Medicaid expansion expands the number of people covered by raising the income threshold for eligibility. That means that families who are severely impoverished, making like $12,000 a year, can now qualify for Medicaid in places they couldn’t previously. like Florida. I know that it is hard to believe, but many states, especially in the Deep South, put their Medicaid eligibility thresholds ridiculously low; in Alabama, for example, you can’t qualify for Medicaid unless you make under $251 a month (or thereabouts, it may have changed slightly since I left the state). That means that Alabama Medicaid excludes the working poor, the bulk of all impoverished Alabamians unless they’re children or too disabled to work at all, leaving an enormous swath of Alabamians uninsured and bankrupting the hospitals who provide a great deal of “indigent care.” In Alabama, several rural hospitals have had to close following Medicaid budget cuts that came down from Montgomery, because their patients are mostly not covered, and they’re very dependent on the Medicaid reimbursements they can get for caring for the few rural people who are covered. A recent study published in the New England Journal of Medicine showed that prior Medicaid expansions led to a fall in mortality rates; in other words, expanding Medicaid saves lives.

Unfortunately, the states who need the Medicaid expansion the most, i.e. Alabama, are the ones refusing the expansion.

Medicaid works through matching funds, or FMAP (Federal Medical Assistance Percentage) that go toward each state’s Medicaid program. The FMAP varies based on the income of the state… here’s a cartoon I made to explain Medicaid funding: 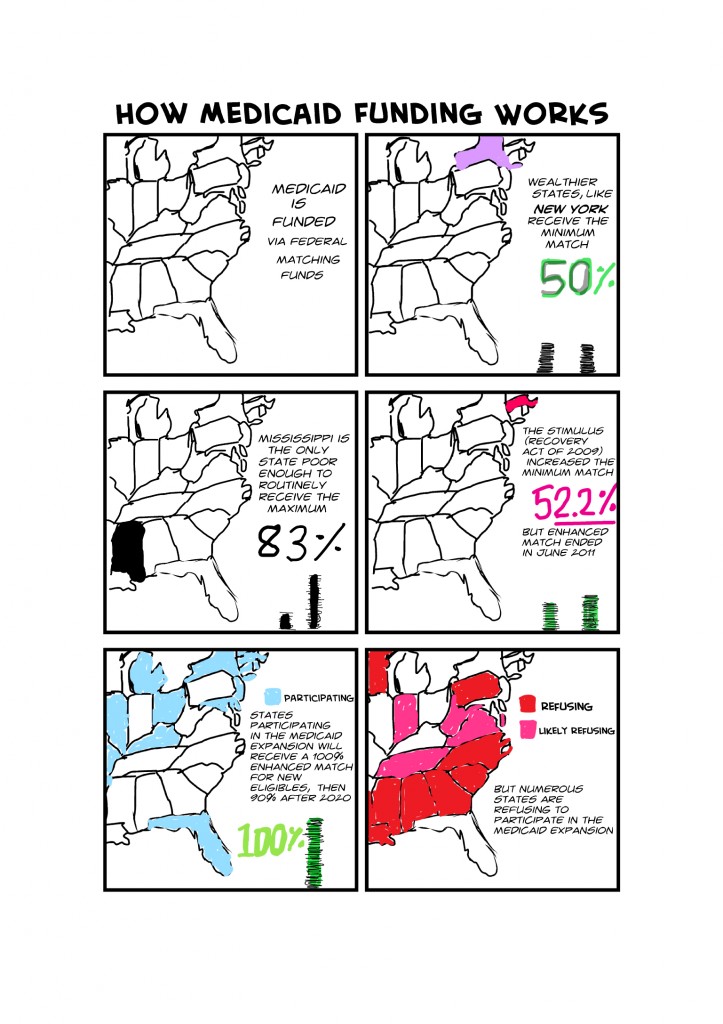 As you can see, the Medicaid expansion increases the number of eligibles, and grants states enhanced FMAP to cover almost all of the costs. But the Administration and Congress have given states enhanced match before, with the “stimulus” bill, the Recovery Act of 2009 (more about this round of enhanced matching). The news media is (per usual) misleading the public. Everywhere I’m seeing print headlines, radio segments and TV talking heads saying, without nuance, that governors opting-in to the Medicaid expansion are “accepting ObamaCare.”

This reddit headline, highlighted on the Brian Lehrer Show recently, is unfortunately typical of the dominant narrative around the Medicaid expansion:

Just because this Medicaid expansion is tucked into an amendment of the Affordable Care Act doesn’t mean you’re “accepting ObamaCare” by participating in it. I agree with Chris Christie on almost nothing, but it is important to be fair to everyone. Christie isn’t flip-flopping on ObamaCare, which I explained in Part 1 is all about subsidized private insurance exchanges, he is participating in Medicaid—a state-federal partnership signed into law alongside Medicare by President Lyndon Johnson in 1965—and he’s taking the enhanced match to pay for almost all the tab new eligibles will incur.

If we’d stop mislabeling governors as “flip-flopping,” maybe more red states would opt-in to the Medicaid expansion; the Southern states need this assistance the most desperately, but are the least likely to take the Administration up on its offer.

Florida Governor Rick Scott (R – Columbia Hospital Corporation) is, so far, the only Southern governor to show any openness to the expansion. Scott’s change of heart, which since he explicitly denounced the Medicaid expansion, was really a flip-flop, is discussed here on PBS. This is one of the least awful talking head segments I have found, though its failure to distinguish Medicaid and ObamaCare clearly enough may further contribute to the confusion:

Next: The Changing Use of Medicaid Waivers, For Evil