So the Vice President of the United States went to Saudi Arabia yesterday for talks about stopping the Iraqi civil war and stabilizing the Mideast. It was all over the news.

These images were all over the TV: 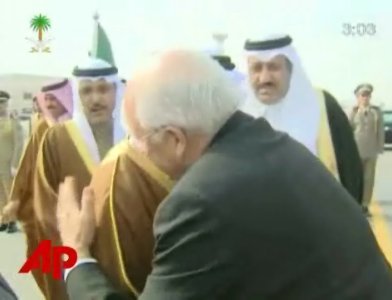 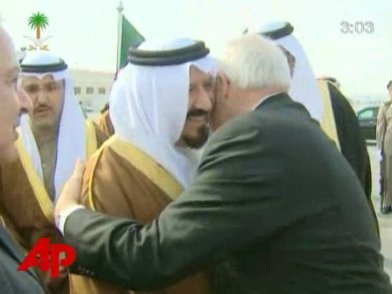 That’s right, Dick Cheney hugged Saudi Arabian dictator King Abdullah and kissed him on both cheeks in the same style that Tony Soprano greets his henchmen. And probably the relationship here isn’t all that different, either.

Even a cursory glance at what “the Arab street,” i.e. everyday Arabs, are saying and blogging, or a quick tour of what the Arab media is reporting, will show you that as long as the U.S. props up and lauds tyrants who oppress them in Egypt, Jordan and Saudi Arabia, as “the moderates in the region,” any talk of “spreading democracy” will be seen as lies, lofty American ideals as mere trojan horses for neocolonialism.

And nothing rams this point home like images of the President and Vice President cuddling up to dictators loathed by their own people. When you see Cheney hugging evil tyrant King Abdullah, it’s so obvious the whole “democracy on the march” rhetoric is crap. You have no “commitment to democracy” if you’re hugging a despot. Read up on their record of supporting terrorism; it’s clear how loathsome and corrupt the Saudi oil monarchy is, and it’s easy to see why their own people hate them.

If this is not okay:

(Rumsfeld thought Saddam had WMD because he still had the receipts)

Then why is THIS okay?

Would the American people and our media say nothing if our leaders hugged Mussolini or Stalin?

Why do they say nothing when it comes to these latter-day despots?

As far as I’m concerned, “I have sworn upon the altar of G-d eternal hostility against every form of tyranny over the mind of man.” — Thomas Jefferson