It has almost become a spring ritual for me. President Bush submits a new budget to Congress, unabashedly filled with loathsome cuts to the lifeline of the poor and disabled (Medicaid) to finance more tax rebates for billionaires and Exxon. I then write a column in the college newspaper challenging the country’s backwards priorities, or, since ’05, I blog about here. But it is every year, it never fails, for six years now. Each year I take up my quixotic sword and crusade against the dragons of rightist immorality, and I’m sick of it, fed up with the harsh toll paid by the disabled minority in increased suffering and death.

Here are this year’s cuts, described in this Associated Press article, “Medicaid Cuts Could Affect Students“

“The kids that need the nurses the most will be hurt the most when they’re not available,” Wilson said. “We certainly would beg that they not eliminate our ability to bill for those services.”

Medicaid is the federal-state partnership that provides health coverage for about 55 million poor people. The federal government will spend more than $200 billion on it this year, while states will spend about $150 billion.

Under the Bush plan, Medicaid cuts also would hit:

– Providers of rehabilitation services for the mentally and developmentally disabled, $2.3 billion.

Health care providers acknowledge they may have a much harder time stopping the regulations than they would any bills in Congress.

“Clearly, the president’s budget has met with extensive skepticism on Capitol Hill. Clearly, the budget moving forward is highly unlikely,” said Tom Nickels of the American Hospital Association. “As a result, initiatives that can be done through regulation are very troublesome.”

What he means is that our employees in the Executive Branch will continue what they’ve tried for six years: backdoor tactics to harm our medical services with administrative restrictions when cuts are blocked in Congress. The old end-around play.

It’s been even worse in the past. Initially Bush proposed to end the Medicaid program in favor of no-strings-attached block grants to the states that would be severely capped and unchangeable if your state has increased needs. This was such a horrible idea and would throw states with already broken and neglected Medicaid systems into such a terrible tailspin of public health and economic crisis, that the (then majority Republican) National Governor’s Association, backed by lots of advocacy from disabilities groups, made Bush drop the plan.

However, deep, sweeping cuts have been proposed by President Bush every year he’s been employed here. Usually the Republican Congress would pare down the cuts from devastating to merely horrible before sending them to the president’s desk to be signed into law, so while our health care system hasn’t collapsed totally due to cuts, it has been hurt dearly. 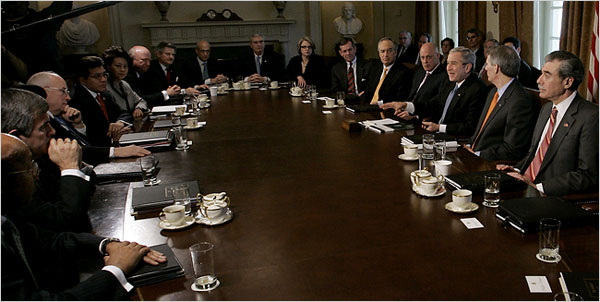 Bush and his cabinet look for “savers” in domestic programs

Americans largely like to pretend budgetary changes such as these have no real effect on their lives. The administration is arguing that their plan to slash $70 Billion from Medicare and Medicaid won’t dent the growth of the program OVERALL, but tell that to the disabled guy who was just told waiting lists for medical assistance are now extended indefinitely due to the cuts to the already-neglected system. Tell that to the paraplegic guy who was dumped out onto the street on Skid Row with a broken colostomy bag last week by a Hollywood Presbyterian Medical Center van, leaving him to crawl on the sidewalk with nothing but a hospital gown and his own feces (full story here). There is inadequate funding all over. We need huge increases if we are to address the massive unmet needs that exist and achieve something of a just society.

For those with severe disabilities dependent on Medicaid, the Republican cuts from 1995-2007 have had horrible consequences. I’ve had to fight like hell to survive. In 1996 in Alabama, Medicaid started gutting EPSDT (the federally-mandated program providing nursing care for those in need) and sending out termination notices to families in the mail. Then in 1999-2001 we had more aggressive cuts. They changed the rules so it’s only a temporary program to train caregivers to stay with their child 24/7, and they keep repeating that it is not the government’s role to “babysit” your child at all (even if your child is on life support and routinely coding). And now it is 2007 and Alabama barely funds it at all. We’ve almost been rolled back into the 1970s level. I’ve had friends die. I’m sick of tolerating this evil like it is a valid policy position. It is in no way valid nor deserving of our deference and patience. It is nothing but immoral.

Both of these are wrong and destructive, yet are widely echoed in America in words and in voting patterns.

I have seen too much suffering and death because of inadequate supports and invisible safety nets and I am frakking traumatized that people are still pushing this destructive right-wing mythology that if we chip away at government funding even further, that this will magically increase services. It has been tried for years and has failed every time.

Medicaid saves lives. Since introducing Medicaid and other programs in the ’60s, infant mortality in America has dropped by 1/3 (the free market previously let those babies die). Medicaid keeps me alive. I would not be alive to type this without Medicaid. We’ve had over a decade of budget cuts pushed by the aforementioned misconceptions, and now Alabama has almost no Medicaid at all; it has been cut back to barely existing. Where are all these wonderful private systems aiding people with disabilities? Nowhere to be found. What fills the gap? Nothing does. There is no free market incentive to help people with disabilities here. People fall through the cracks and die over and over and over and over. I’m beyond fury and disgust at what Alabama has done.

Yet we can still entertain the fantasy that if government just goes away, the market will devise a better system? I’ve even seen some people with disabilities writing, “yes, I don’t mind if they cut Medicaid! vote GOP!” shortsightedly believing it won’t effect them (evidently it’s okay to hurt someone else as long as it isn’t you). These ideas should be long-since discredited and abandoned as purely destructive to our basic survival.

If you gut government funding and leave people with disabilities to the free market jungle, they are devalued and thrown aside.

I am arguing the fundamental truth that reducing funding for people with disabilities does not magically increase funding for people with disabilities. I am arguing the fundamental truth that very few of the severely disabled would ever survive without help, our needs are expensive, and I don’t see the free market ever giving us services for free (the market is wonderful for many things, like efficiently meeting demand for widgets, but keeping us alive isn’t one of them). Therefore, we need government funding, and (if this is properly prioritized) substantially MORE government funding, not less.

In a perfect world (known in Judaism as the Messianic Age) all health care would be free. It would be patently obvious to everyone that this immoral system that makes sick people fork over all their assets or die, is to be abandoned!

The rift between me and the Republicans in power is I am trying to build a more perfect union NOW with free health care for everyone, and they are fighting it tooth and nail, in an idolatrous mindset against every major religious text that makes money and serving money the center, not mitzvos (commandments / good deeds).

My politics are an essential mandate stemming from the basic moral and spiritual system I have always had. Because the national Republican platform embraces the despicable policy of slashing aid for the poor and disabled (those who need it most) and giving the money in huge tax cuts to those who need it least (billionaires), because for three decades they have aggressively pushed gigantic rebates for oil corporations (that already have bigger profits than the GDPs of most countries) as of far greater importance than funding health care and reducing our infant mortality (which is still bad and behind Cuba’s) and because of these policy differences, I doubt I will ever ever ever ever support a Republican for president. Democrats, while chock-full of their own problems, have opposed cutting health care every time. It is from this framework that I will be assessing candidates for president and their health care plans.

And I’ll continuing opposing every attempt to cut health care.